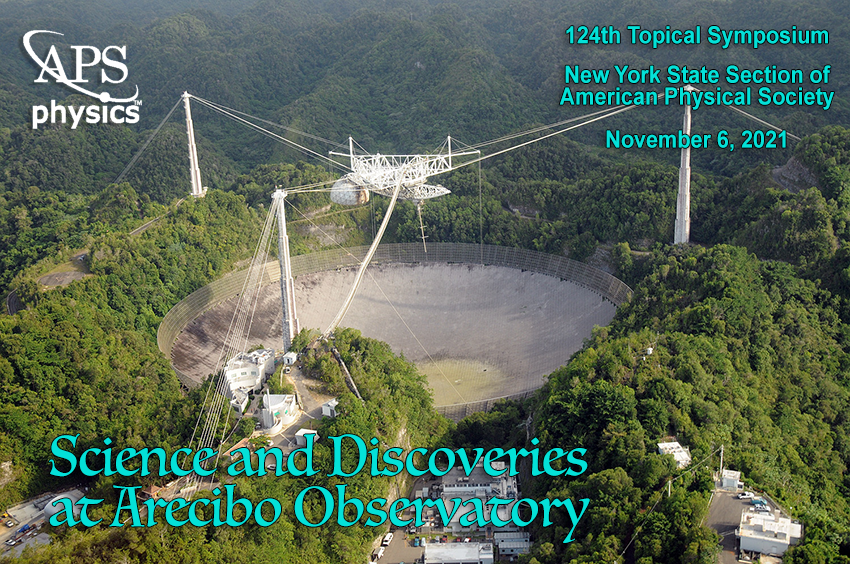 The 2021 joint meeting of the New York State Section of the American Physical Society and the Astronomical Society of New York was a topical symposium titled “Science and Discoveries at the Arecibo Observatory”.

The symposium featured five presentations showcasing the Arecibo Observatory’s history, its future, and the major discoveries it enabled within the three focus areas of Arecibo science: Astronomy, Planetary Science, and Space & Atmospheric Science.

“The organizers felt it was critical to highlight the accomplishments of Arecibo as a national observatory, especially one that was managed in New York State for decades and used by so many New York State scientists,” says Dr. Rebecca Koopmann of Union College, one of the organizers of the event.

The audience of over 70 people was composed mainly of professional physicists, astronomers, and engineers from New York and adjacent states, many of whom are faculty and students from universities and colleges. Because the event was virtual, additional interested attendees from across the U.S. were able to view the presentations

“We hope that the attendees have an even greater appreciation of the many accomplishments in diverse fields made possible by Arecibo, and that they have an understanding of what was lost when the telescope collapsed,” says Dr. Koopmann.

Dr. Allison Smith, a scientist at Arecibo and a speaker and organizer for the event, agrees. “I hope the participants gleaned that although the telescope was operating for nearly 60 years, the repeated upgrades it underwent and its general versatility kept it scientifically relevant right up until the collapse.”

Both scientists emphasize how important it is that the scientific community thinks towards the future of the Arecibo Observatory.

“A year after the collapse, there are still no concrete plans to replace the majority of the capabilities that our communities lost, but this is something we have to keep working towards,” says Dr. Smith.